The Central Bank of Nigeria’s digital currency, enaira, is now live and available for download, as  Nigeria takes the lead as the first country in Africa with a working CBDC.

Nigeria’s unveiling was earlier scheduled for October 1, 2021, but the CBN said it was postponed owing to other national activities to mark the country’s 61st Independence anniversary.

You can visit the website to download the eNaira speed wallet, as the application is now available for iPhone and Android users. 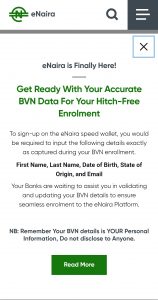 The digital currency has two applications – eNaira speed wallet and eNaira merchant wallet, and are now available on both Google Playstore and Apple Store.

According to a statement on the eNaira website, “eNaira is a Central Bank of Nigeria-issued digital currency that provides a unique form of money denominated in Naira.

“eNaira serves as both a medium of exchange and a store of value, offering better payment prospects in retail transactions when compared to cash payments.”

Osita Nwasinobi, spokesperson of the CBN, said the launch of the eNaira is a culmination of several years of research by the apex bank in advancing the boundaries of payment systems to make financial transactions easier and seamless.

How To Apply For The CBN Graduate Entrepreneur Loan

How to start a jewelry and accessories business; A step-by-step guide.

Establishing your own jewelry business can be quite rewarding, even if getting started can be tough. Whether you're interested in...

Starting A Mini-Importation Business? Here’s 7 things you should know.

SOCIAL MEDIA BEHAVIOURS THAT CHASES YOUR CUSTOMERS AWAY

Avoid these red flags and see how your conversion rate spikes up As a business owner, you can post beautiful...

HOW TO START A PERFUME SALE BUSINESS

Looking good is amiable, but accompanying it with a nice scent is reputable. Helping people discover their signature scent and...

HOW TO START A CLEANING SERVICE BUSINESS

In recent times, cleaning has grown rapidly to become a big business and an honourable one too. This was not...

As an entrepreneur that hopes to keep your business going, there is no running away from the law, and if...

The Nelson Mandela Freedom Park in Osogbo, Osun State once held promise for the residents of the state. It was...

Stop Your Business From Losing Money With These 6 Powerful Tips

5 Reasons Why You Should Niche Your Business

Tips for building the right financial model for your business

Reels: The right way to use them for business growth