by Contributor
in Trending News
0

Nigeria’s local currency depreciated massively against the US dollar in the past week, closing at a record high of N605 to a dollar, despite starting the week at N590/$1 at the black market.

The macro-economic issues affecting the Nigerian economy continued into the week as the National Bureau of Statistics (NBS) also released the inflation report for April 2022. The NBS reported that the country’s inflation rate rose to 16.82% from the 15.92% figure recorded in the preceding month, further eroding the purchasing power of businesses and individuals as a whole. Further analysis of the NBS report showed that states like Bauchi, Ebonyi, and Akwa Ibom recorded the fastest inflation numbers in terms of headline inflation during the month under review while Kogi, Kwara, and Ebonyi states led the list in terms of food inflation.

Similarly, the Nigeria Stock market recorded a rare bearish trading week as the All-Share Index declined by 0.22% after five consecutive weeks of positive returns to stand at 52,979.96 index points. Despite the drawback, the market has posted a 24.03% year-to-date gain, while its quarter-to-date return is already over 12.8%.

The CBN continued its intervention in the official exchange rate market; however, the naira grew slightly weaker against the US dollar at the NAFEX window, closing at N419.02/$1 on Friday from N419/$1 recorded in the previous week. A total of $623.3 million was also traded in the market during the week, which is lower than the $732.9 million that exchanged hands in the previous week. Also, based on data from the CBN, Nigeria’s external reserves declined by $216.84 million to $38.8 billion as of Thursday, 19th May 2022. 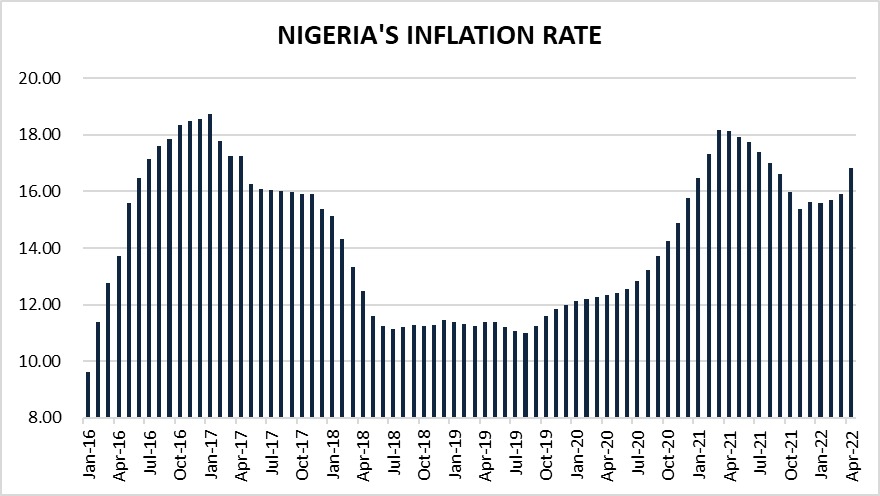 This is despite the organization increasing the country’s crude oil production quota to over 1.73 million barrels per day earlier in May 2022, thus implying that Nigeria continues to record a shortfall from its production quota. By implication, this means that the country’s crude export earning is taking a hit despite the rally in the crude oil market. This is particularly important considering that crude oil earnings account for a significant proportion of the Federal Government’s revenue and accounts for almost 90% of Nigeria’s forex earnings.

It should be noted that the availability of forex in the Nigerian economy determines, to a large extent, the performance of the country’s exchange rate. Specifically, more forex in the economy suggests a stronger naira, while a crunch in availability spells further depreciation for the local currency. Consequently, if the naira constantly declines on the back of continuous importation of foreign items, Nigerians will face higher inflationary numbers, which in turn erodes the earnings of the people and businesses operating within the shores of the country.

Why this is important

As a business owner operating in Nigeria, it is important to be abreast with the macro-economic performance of the country as this has a direct implication on your business. Having adequate information about the Nigerian economy will aid better business decision-making, helping to ensure business sustainability and growth.

Creating a Business Plan: 6 Biggest Mistakes To Avoid in 2022

To support SMEs in the country, Wema Bank through its SME Business School recently trained a total of 156 entrepreneurs...

Three female entrepreneurs who emerged winners of the maiden edition of the Women’s Entrepreneurship Day Program organised by CreditPRO and...

Creating a Business Plan: 6 Biggest Mistakes To Avoid in 2022