by Contributor
in Trending News
0

Nigeria’s external reserves ended the month of June 2022 at $39.16 billion, dropping by $1.37 billion from the $40.52 billion figure recorded at the beginning of the year, data from the Central Bank of Nigeria shows.

This decline in the country’s foreign reserve is despite sustained bullish crude oil prices occasioned by the continuous face-off between Russia and Ukraine. Nigeria’s inability to leverage on the rising oil prices, despite being a major oil-producing country, has seen the external reserve level plunge significantly.

Similarly, the continuous intervention of the Central Bank in the Investors & Exporters window, where foreign exchange is traded officially, has also contributed to the downturn in the external reserve level as foreign inflows from export is still below the country’s demand. For example, the apex bank supplied a total of $13.29 billion to the official market in 2021, some of which came expectedly from the foreign reserves since diaspora remittances, crude oil export earnings, and other forms of capital importation are dwindling.

While the inability to improve production has been attributed to oil theft, oil bunkering, and other issues relating to insecurity, it remains a fact that the sector is largely underperforming, causing huge losses to the country, and depriving the Federal Government of the opportunity to capitalize on the bullish oil market to generate inflows.

The prices of crude oil have remained on the high side in 2022, following the rise in demand for fuel as economies continue to open up from the Covid-19 pandemic. Also notable has been the impact of the face-off between the oil-producing nation, Russia, and Ukraine, leading to trade sanctions being placed on Russia. This has caused a significant shortage in the market, keeping crude prices elevated, triggering a global energy crisis, and by extension, causing inflationary pressure at unprecedented levels.

Despite being a member of the Organization of the Petroleum Exporting Countries, placing it amongst the possible gainers in a situation such as this, Nigeria has unfortunately been unable to meet its OPEC production quota of 1.7mbpd, despite boasting the capacity to produce over 2mbpd. According to a report released by OPEC, Nigeria’s crude oil production fell further to its lowest on record at 1.02mbpd, representing a significant shortfall compared to its target.

The country would have been able to boost its external reserve significantly had it been able to match production with the oil prices in the global market. Unfortunately, continuous challenges ravaging the sector have ensured that the African giant has not taken full advantage of this opportunity. 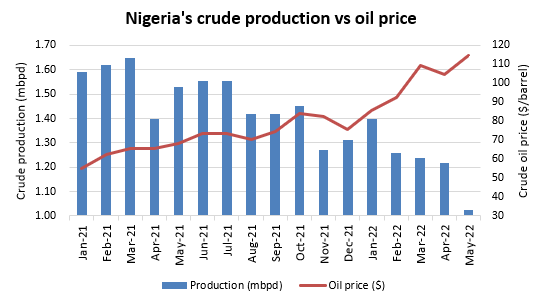 Why this is important

The Nigerian currency has been on a downward slope in recent times, characterized by FX scarcity which has pushed the exchange rate to as high as N425/$1 at the official market and N617/$1 at the black market.

The external or foreign reserve is used by the monetary policy regulators to defend the currency from depreciation. However, despite the apex bank’s intervention to avert the devaluing of the naira, the currency has depreciated by over 2% year-to-date at the I&E window.

This persistent decline in the value of the local currency means that businesses that are exposed to foreign exchange are incurring huge operational costs, leading to further inflation in the economy. Nigeria’s inflation figure currently stands at 17.71% as of May 2022 and is expected to rise higher in the coming months following the recent petrol scarcity and the hike in the cost of diesel.

It is important for Nigerian businesses to monitor the movements of these macro indicators as they go a long way in determining what happens to their money. This would also help in understanding the ways by which they can mitigate the effects of the downturn, in the short, medium, and long term.

Brand War: X-Pression and Lush slug it out in the Nigerian hair market?

A Billionaire Entrepreneur Who Started from a Printing Press: 5 Lessons from Femi Otedola

As an entrepreneur that hopes to keep your business going, there is no running away from the law, and if...

The Nelson Mandela Freedom Park in Osogbo, Osun State once held promise for the residents of the state. It was...

All is set for the 7th Annual Edition of the Zenith Bank International Trade Seminar, which will be held on...

The MTN Foundation is partnering with the Bank of Industry (BOI) to give out business loans plus training and support...

Some Legal Requirements You Need To Know For Your Small Business

Typically, people think that all it takes to set up a small business is to get some money for the...

Why is it called the Black Market?

I first heard the term “black market” sometime in 2007. I think fuel was retailing at N65 per litre at...

7 Ways That Having A Website Helps To Increase Sales

These days, everyone seems to be selling something. From digital products like courses, e-books and access to webinars, to physical...

A Billionaire Entrepreneur Who Started from a Printing Press: 5 Lessons from Femi Otedola