We did not register ‘Wickedness Association’ as a business entity, Says CAC

The Corporate Affairs Commission (CAC) has dismissed a claim that it registered “Wickedness Association of Nigeria, Lokoja Chapter” as a business entity. 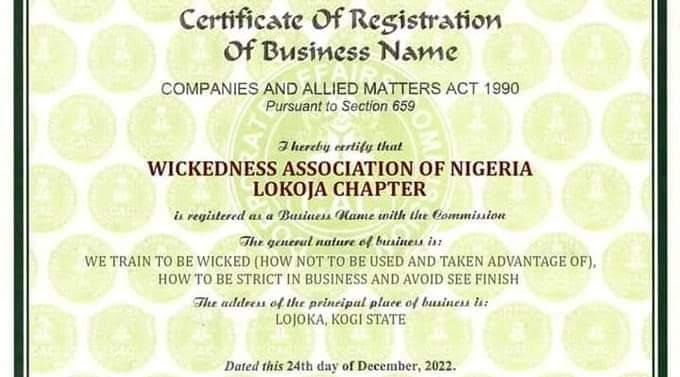 In a statement, the commission described the certificate as “false, fake and a forgery.”

It also said the officer who was said to have signed the certificate had retired from the service of the commission long before the date the certificate was purportedly issued.

The commission through the statement also provided reasons why it could not have issued such a certificate. “The commission does not register associations as business names. The name and object of the ‘association’ offend the provisions of section 852 (1)(c) in that they are undesirable, offensive and contrary to public policy.

The CAC called on Nigerians to ignore the ‘certificate’ as it did not emanate from its office.

“Accordingly, the general public is hereby informed that the purported certificate of registration of ‘wickedness association of Nigeria Lokoja branch’ is false, fake and a forgery. It is wicked and fraudulent,” the statement said.

It could be difficult to determine the longevity of a business. Whether a business will last for 10 years or...

Will your business be affected? Lagos begins 2023 demolition exercise

The Lagos State Physical Planning Permit Authority (LASPPA) has commenced its enforcement activities for 2023 as it recently sealed an...

A Small Claim Court has been introduced in Bayelsa state for recovery of debts not beyond N5 million in the...

In a recent report titled ‘Market Bite Nigeria’, the International Finance Corporation revealed that the contribution of Micro, Small and...

The National Directorate of Employment (NDE), through the Rural Employment Promotions (REP) Department, has disbursed N4.2m loan to 42 farmers...

Small Biz Hacks: Turn Every “No” Into A “Yes” With These Pro Tips