by Contributor
in Business, News, SME
0

Having a problem like the rising prices of food and services is worse enough, however, a double whammy problem of hikes in prices and currency devaluation culminates in economic doldrums that can cripple the purchasing power of individuals in the country. This is a peculiar issue in Africa’s largest economy, with the inflation rate maintaining double figures for over ten years and the exchange rate constantly depreciating in the face of a lack of liquidity in the economy.

The National Bureau of Statistics (NBS) last week released its Consumer Price Index (CPI) report for June 2022 which showed that Nigeria’s inflation rate accelerated to its highest level in over five years at 18.6%, an uptick compared to the 17.71% figure recorded in the previous month.

The genesis of the recent hike in prices

The rise in the inflation rate cannot be isolated from the global surge in energy prices, which seems to be causing a huge supply gap in Nigeria despite being an oil-producing nation. The price of crude oil has remained high following the war between Russia and Ukraine that began in February 2022. The rally in the crude oil market has sent the price of gasoline to record highs across the world. Amidst fuel scarcity, Nigeria has experienced a 33% increase in the price of petrol with the product selling for as high as N220 per litre in some cities. Likewise, the price of diesel has increased to about N850 per litre.

According to NBS data, the average price of diesel increased by 153.6% between January and June 2022, selling at N733.78 per litre compared to N289 per litre at the beginning of the year. Similarly, a litre of petrol increased by 6.1% in the first half of the year, selling for an average of N175.9 per litre. In some areas in the country, petrol is sold for as high as N210 per litre.

Due to the surging rate of inflation in the country, the Central Bank of Nigeria has raised the benchmark interest rate twice in 2022, first raising it from 11.5% to 13% in May 2022 and then to 14% in July 2022. However, analysts have raised questions about the effectiveness of monetary instruments in curbing the rising costs of goods and services in the country, arguing that it is a global phenomenon and that it is due to a supply gap. 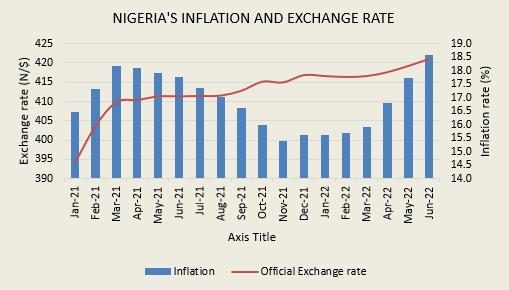 Another issue battling the Nigerian economy is the depreciation of the local currency. The naira has faced immense pressure from declining forex inflow and scarcity. As of press time, the naira has depreciated by N75 at the black market since January. The local currency is currently trading above N640/$1 at the unofficial market. Similarly, at the official Investors and Exporters window, the naira depreciated from an average of N416/$1 recorded in the previous year to N426/$1.

The devaluation/depreciation of the local currency means that individuals and businesses who need forex to keep up with their import bills will pay more to acquire forex. Consequently, the operating expenses of businesses have gone up significantly, leading to a reduction in working hours, the downsizing of staff, and other moves that are geared towards reducing expenses. Some other companies have shifted the rising costs to their customers, effectively causing a further rise in the prices of goods (inflation). It is now imperative that businesses and individuals find ways to manage their expenses amidst rising prices and the depreciating currency.

WhatsApp is the third most-used social media network in the world. The Business version was created specifically to serve small...

In March 2021, Titi and Bose decided to start a clothing business. They sat down and drew up the cost...

As a small business owner, hiring your first employee is a major step in your entrepreneurial journey. It is a...

Funds are critical for the sustainability of any business. What you do with the funds is even more important. As...

A look at MTN, GLO, AIRTEL, & 9MOBILE  Imagine you are chatting with a prospective customer, and just when it...

7 Benefits of Registering your Small Business in Nigeria

There is a need for small businesses in Nigeria to register with the Corporate Affairs Commission (CAC) - the body...